Who is this man at our retirement community gym? I see him working out each morning while I and my fellow seniors are doing our various exercise routines. What can I say about him? He is intensely disciplined as he goes through what can only be called his process, a progression like no one else’s in the room. What flexibility, what determination. Has this fellow been to Tibet, trained by monks, snacked on yak butter (yuk)?  He is very tall and must have been thought a demigod by the Buddhist gurus who taught him.

How can an occidental geezer like he be so flexible?

Over the months my curiosity grows and grows. On my 20-minute walk to the clubhouse each day, I speculate about his “story.” Let’s see, how would Sherlock Holmes do this? Sure, review the evidence. Hmm, he is tall, lean, well-toned, with a serious and authoritative aura. To retire to this upper middle-class community, he probably had a long career requiring a lot of sitting, the bad effects of which can only be countered by regular stretching and exercise. The answer becomes obvious—he is a retired pilot. Isn’t the nearby mega city, Atlanta, the HQ for one of the largest airlines in the world, Delta?

Feeling smugly comfortable with my discerning analysis, the next step is to engage him in conversation and get around to confirming my conclusion. But he has a somewhat intimidating air about him, as he seems really into his methodical routine, suggesting that fellow exercisers had best keep their distance.  Do I wait until he finishes his entire set, or do I interject as he changes stations? How do I start the conversation? I toy with hitting him with my brilliant conclusion, opening with, “I’ll bet you were an airline pilot?”  I could then glow in my insightfulness as he answers in wonder, “How did you know? Amazing!” Another option is to just go up to him and introduce myself. Maybe there are even more options for breaking the ice? Over the weeks I work this dilemma to death. Should I, or shouldn’t I?  My walks to the gym are getting stressful.

This morning we are both working out, and I think about all my usual excuses for postponing action, cowardly trying to avoid any contact. At the end of my session I throw caution to the wind and comment directly to him about his extraordinary flexibility and his slow and disciplined stretching. I await his possible gruff, snobbish reply with trepidation, this former senior pilot of jumbo jets, responsible for on-board discipline and safety of hundreds. Has my scenario taken a life unto itself?

To my astonishment, he replies in a friendly voice, saying how pleased he is that I took the time to speak with him. He puts out his hand and introduces himself. Wow! I think about all those wasted hours ruminating about this. What unnecessary apprehension.

No, he is not a pilot. As a youth his doctor told him that he had extraordinary flexibility. Then in college he had an exceptional and very talented coach with a PhD in calisthenics and physical therapy, who educated him on the benefits of regular exercise and proper stretching. The coach advised his students to do this one-hour exercise regularly throughout their lives. Apparently, my gym mate follows this advice assiduously, even into retirement.

With the ice broken, I blurt out that I had been trying to figure out the genesis of his uncommon routine over many, many weeks, thinking how to diplomatically initiate a dialogue.  Sheepishly I tell him about my jumbo-jet-pilot-with-the-bad-back theory.

He demurs, saying he too has a confession. I think, “A confession? This should be interesting.”  I listen silently, giving him full attention as he has more than piqued my interest.

He smiles as he says that he notices me walking to the clubhouse day after day, shouldering my accustomed blue back pack. He speculated about why I hauled it so religiously and what it might contain. Verging on obsession, he developed scenario after scenario in his head. He too pondered how to break the ice with me. He couldn’t just start with, “What do you carry in that darn bag?”  We both break out in smiles, realizing we were on parallel paths of curiosity over these past many weeks.

Thinking about how he wondered and wondered about the contents of my bag, I relate a story from my preteen years. This tale was in a popular 1950s comic book called “Tales from the Crypt,” specializing in eerie stories. It went something like this:

There once was a medieval village where lived a short grotesque looking man who was the gossip of the hamlet. He was a loner who traveled daily along the dusty main road from his home deep in the woods, through the village center, and back the other way a few hours later. He never uttered a word to anyone. On every round trip he carried a straw basket perched on his right shoulder, his right hand atop the lid, holding his burden in place. Never was he seen without it. The routine went on no matter the season, no matter the weather.

Children would run for the safety of their mothers’ skirts when he was sighted. Speculation as to the contents of the basket increased and intensified as the years went by. The village became obsessed with the daily inscrutable passer-by. Most said he was evil, some that he was a town menace, and all burned with curiosity about that infernal basket. What in heaven’s name could be in it?

The village folk started to lose all interest in their daily duties, so caught up with the basket obsession. This called for action by the village elders. To get things back to normal it was decided to confront the basket carrier on his trip the next day.

The next morning all work was forgotten as the townsfolk obsessed about the daily intruder. People demanded that he must be accosted and questioned. What the heck was he carrying in his basket? Others cried, “Drive him out of our village forever.” Another fast-growing faction was demanding his execution, reacting to fear as well as curiosity.

Around noon the grotesque figure came trudging through the village as usual. He ignored the unexpectedly large crowd forming a menacing gauntlet on both sides of the road. As he reached the town center, a rock arced through the air, smashing into his head, causing a trickle of blood to drip down his hair. He hesitated and groaned quietly but immediately resumed his plodding pace.

Infuriated by his stoical reaction, the villagers began hurling more and larger stones at the daily intruder. The townsfolk seemed to want to cleanse their home of this evil, fearsome intruder once and for all. The collective onslaught of  fists pounding and boots kicking had its cumulative, yes, fatal effect. The stranger fell silent in the center of the road, never to get up again. The crowd cheered wildly, their fear and angst dissipated at last. Ever so gradually the mood changed. Shoulders slumped, heads bowed, and neighbors could not bear to look in neighbors’ eyes. What had they done?

One burly man seemingly unaffected by the gruesome execution pierced the hush with a shout of, “The basket, the basket. Look in the basket.” The throng awakened with renewed purpose and edged toward the lifeless, bleeding body, with the chief elder being gently pushed to the lead.

Reaching the stranger’s corpse, the elder looked around, signaling he wanted silence. All complied immediately. Eyes watched as he bent over the dead body and unhitched the lid of the basket. Looking in, he gasped in astonishment. All shouted, “What is it? What in God’s name is it?”

The elder stood up slowly, holding a bottomless basket. There on the ground was the mystery disclosed. It was another head. This unfortunate stranger was a freak of nature, born with two identical heads. This victim needed not derision but kindness and understanding. The little village was never the same again. My new gym buddy got the irony of the story. We both smiled.  As I walked away, he hesitantly asked, “So, what do you carry in the back pack?  I smiled devilishly and just walked away letting the question hang there in my ethereal wake.

The last few years before moving to our Del Webb Community, Mary Ann and I just spend a quiet New Years Eve at home. We agreed it was just too dangerous getting out on the highway late at night and with everyone drinking.

That has changed the last two years as we joined the New Years Eve Party at our lovely clubhouse. The drive is only about 1 mile on community streets, so no more excuses. We went to the party last night and I must say it was fun. The ballroom was decorated and party favors for everyone. 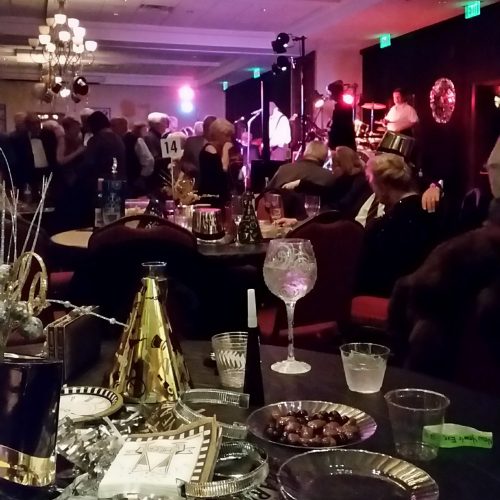 Mary Ann used to really like to dance back in the day and the band last night gave her a chance to rekindle her love of dancing, along with a packed ballroom full of fellow active adults doing the same thing to the music of Butch and The Buckheads.

Everyone was friendly and we meet a few new people, including this happy couple who was kidding around for my photo. 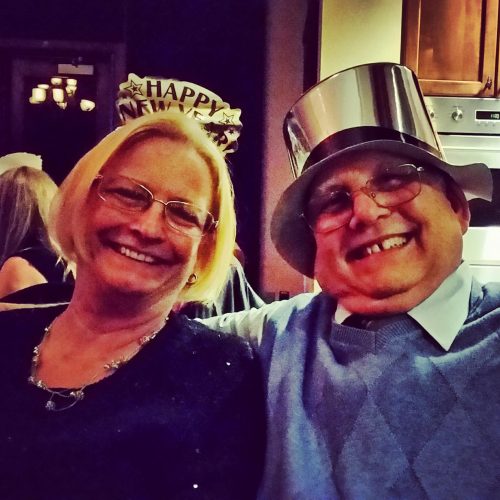 As the magic time came when the New Year 2017 arrived, there were plenty of hugs going around. Afterwards, we gathered our stuff including the chocolates someone gave us, and we were back home by 12:20pm!

We are glad, once again, to experience the New Year Eves Party with friends. Something we would have missed back in our Johns Creek suburbs. Another reason we are glad we moved to Village at Deaton Creek.