Beginning in 1987 and held every other year, The National Senior Games is the largest multi-sport qualified competition event in the world for men and women 50 and older.

More than 800 events are contested over two weeks at sport venues throughout the region. We attended sports events at Samford University, Birmingham-Jefferson Civic Complex (BJCC) downtown and the Hoover Metropolitan Stadium parking lot (for the 5K race walk) and the athletic fields (for archery).

I competed but was also a spectator to many interesting events. 19 Medal Sports: Archery, Badminton, Basketball, Bowling, Cycling, Golf, Horseshoes, Pickleball, Race Walk, Racquetball, Road Race, Shuffleboard, Softball, Swimming, Table Tennis, Tennis, Track & Field, Triathlon and Volleyball. There are too many things to see, so you have to chose.

Male and female divisions compete in five year increments, ages 50 through 100+. I saw a 104 year old man who competed in field events and I saw 50+ year olds sprinting on the track. I will share some of the photos that I took from the events we attended to give you a feel of the competition.  More information can be found from the web site National Senior Games.

I had no idea that archery was so popular. We saw the archers shoot from 60 yards away and look how close they came to the bulls eye! The equipment used was amazing and consisted of three classes of bows. The attire, equipment and skill was something I had never seen and I found quite interesting.

One morning we sat on the 50 yard line and watched the sprinters in 50 yard dash. Each age group, female and then male, had their turns so the events lasted all morning. We watched sprinters in the age 55 group who were very fast and we watch 80+ year old sprinters who were also impressive.  The day I competed we had to leave afterwards to check out of the hotel and missed the 101 year old lady doing the 50 yard dash, but saw the video. Here are some of the shots I took.

Here I am in blue #27 at the starting line of the 1500 meter race walk with 32 others in the photo taken by the National Senior Games.  I came in 4th in my age group. The second is of me two days before in a flood and raining doing the 5K race walk. That was quite an experience.

Mary Ann and I both are learning to play pickleball, so we took in a few games on two days. The 55 year old men doubles were outstanding, then  we saw the mixed doubles where these photos were taken. 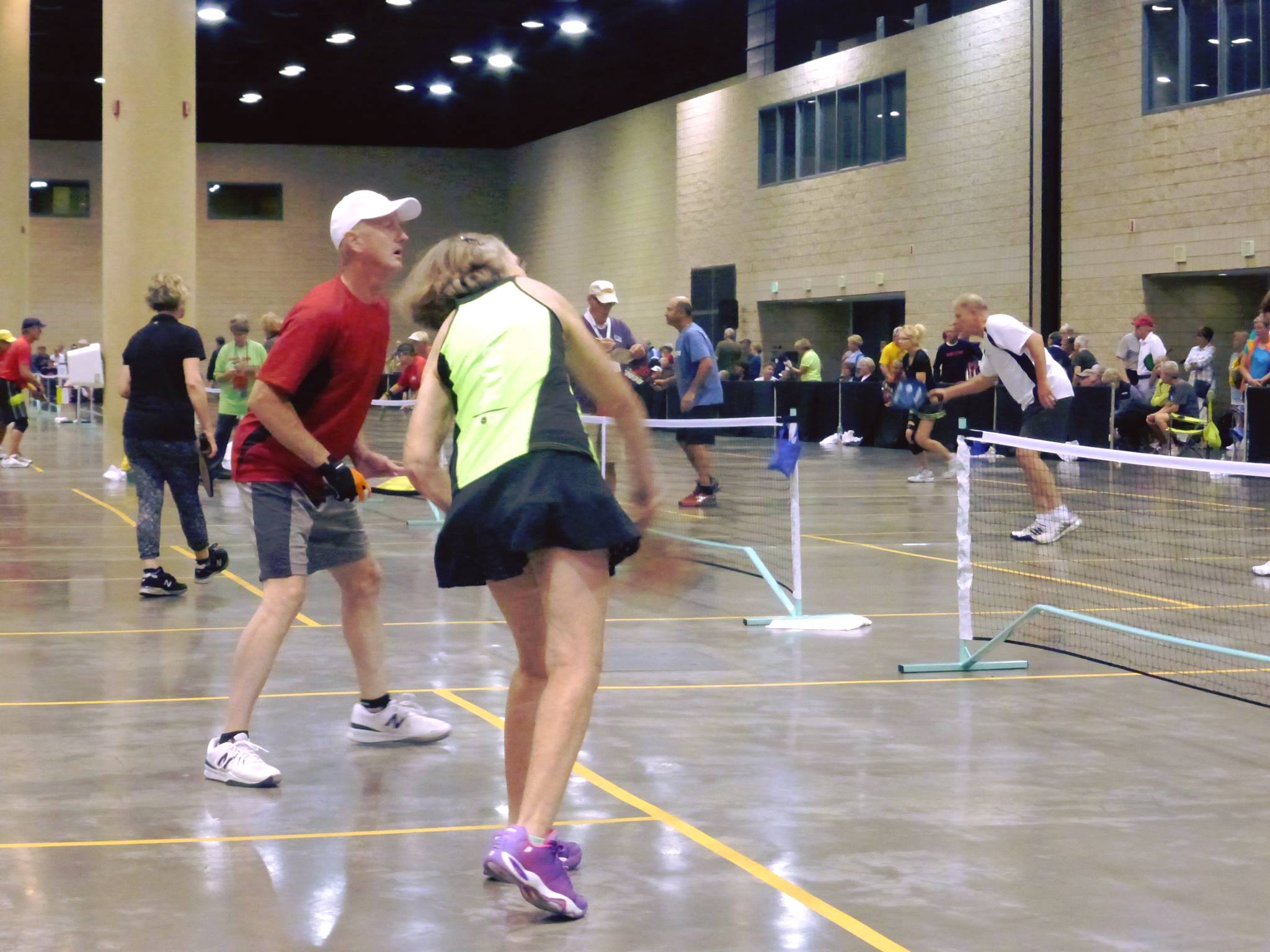 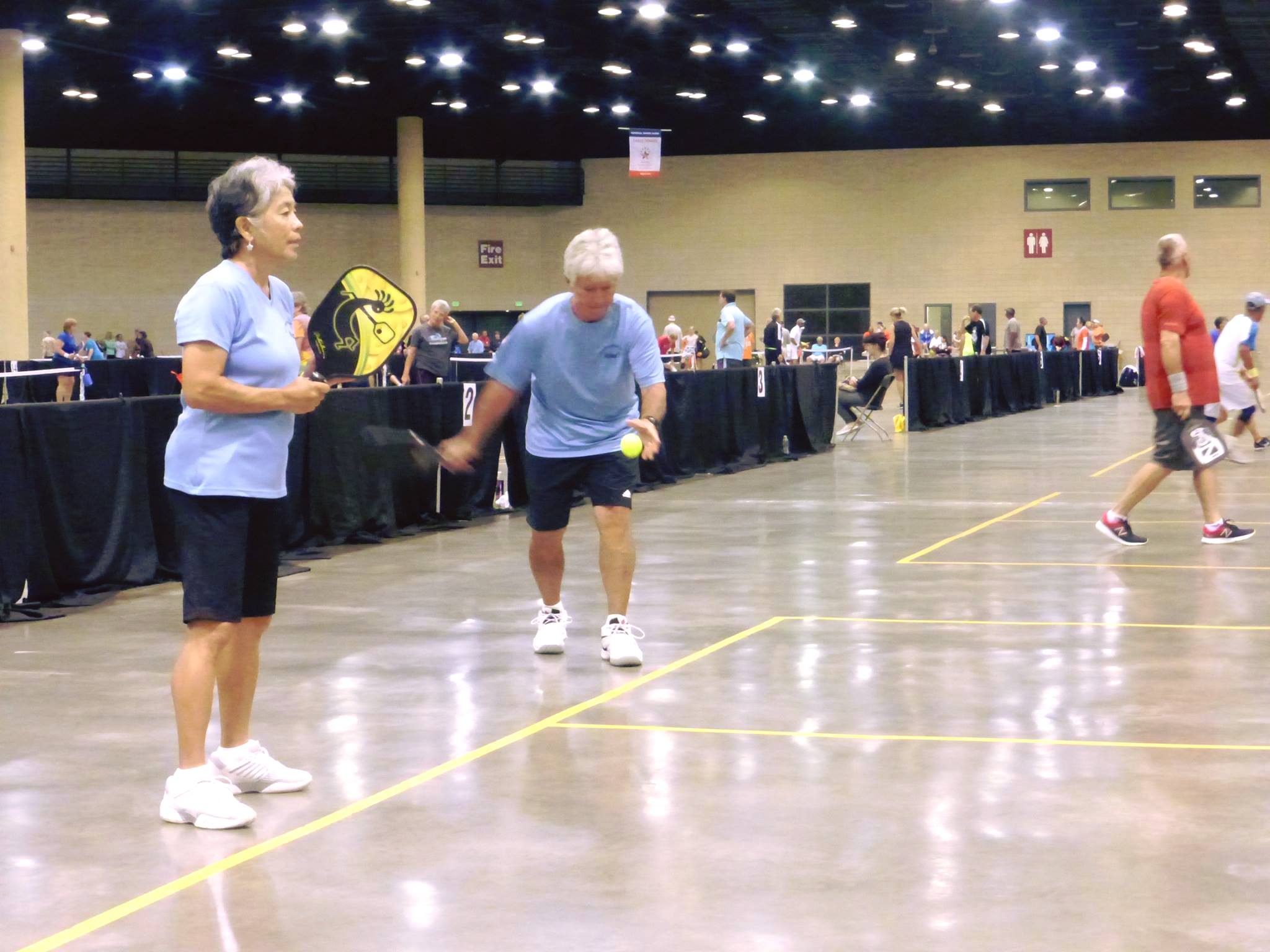 We met this nice lady Carol Cross at our hotel. She came from Ohio to compete in field events, like shot put, discus, javelin and hammer throw. We went to see her compete in the Hammer Throw and she handed me her phone to do record Facebook Live of one of her throws. I learned something new and met a nice person!

This was the second National Senior Games I have been to and enjoyed both. Many of the people we met have been coming back to these games for years. We may be joining them at the next one in 2019 in Albuquerque NM.

There is a very positive vibe going on. People are very excited to be competing in an event they have been training very hard for. It is interesting just talking with people like Carol and hearing their story about how they got there and about their sport. You can then even go see them compete!

At the awards ceremony there is a glow of confidence of a job well done, the finish line has been crossed, at least for this challenge. This is more than just a sport, it is discipline, determination and a way of life!  It results in many positive benefits including weight loss, firm solid body, and healthier one too. Mentally it shows that you can accomplish your goals and just makes you feel better. It puts you in touch with new and old friends who share your quest.

Vicki Pilgrim, head of Georgia Golden Olympics says their survey shows competing is the reason most people like senior games.

You don’t have to be an elite athlete to compete.  Just participate in your state senior games and most likely you will qualify for the National Senior Games in 2019 in Albuquerque. It will be worth it!

PS: The Villages in Florida had their own team and we met many people that live in Active Adult Communities.  We here at Village at Deaton Creek have started our own race walking team and would include others who are interested in senior games. Contact Robert Fowler or Jane Gregg for more information.

Haha! Let’s get them playing more tennis. I once played against an 89 year old when I was just nine years old. Cool experience… Truly a game for all ages.

Pickleball? All of a sudden I’m hearing lots about this game. I need to find a group in my neighborhood. Thanks for the tips.

This is a nice post explaining a lot about national senior games. I really appreciate your efforts to do so.

It is nice to see that Pickleball is gaining more popularity. It’s a fun and unique sports.

Wow,
Fantastic arrangement about national senior games! I love your interesting article. Thanks for you shared excellent information with us. Pickleball is a most popular game in the world. Its really fun and thrilling games for the senior.
Continue your blogging…