On a Celebrity Cruise ship during a sea day, I went to a Beyond The Podium Series talk by Gid Pool. The subject was about making the most of your Act Two.  You know, Act Two, the second part of your life, where you do the things you always wanted to do.

Gid shared his story, of how he began a journey on his Act Two and became a Comedian.  His story is interesting.  He always loved making people laugh in school and his secret dream was to be a comedian.  But then the real world caught up with him, as it did does for all of us and the dream seemed lost forever.

So how did Gid come to talk about Act Two, at age 71?  His story is interesting.

At age 61, his wife’s boss invited them to his Comedy course graduation in Sarasota, Florida. This sparked life to his almost lost dream and with the support of his wife, Gid took the comedy course, which led him to emcee at the local comedy club, doing shows at comedy clubs, then to being interviewed by the Wall Street Journal, being featured by Jane Pauly about some amazing things seniors are doing in their Act Two, then AARP featuring Gid at their National Convention’s Life Re-imaged Series.

Wow, what a series of events. It doesn’t stop there either. When I spoke with Gid on the Celebrity Ship, he said he and his wife were having the time of their lives doing the Celebrity Beyond The Podium Series as well as his featured comedy show.  Many cruises later they have been to a good many parts of the world and have met so many interesting people, sharing how to make the best of their Act Two. He said he would send me his book he was working on when it was released.

Last week I received Gid Pool’s book “Act Two & Beyond”. Inside the cover he wrote:

To Robert – Make each day more spectacular than the last!! – Gid Pool.

I just finished the book and relate to a lot of it. Gid reminds me of my brother Frank, always the kidder and making people laugh. But the book  is not about comedy, but about not being constricted by what you have done with your life, but instead motivated by what you want to do.

There are many people who have become famous and successful  because of their Act Two, but the book is not about that either, it’s about how to rekindle your dreams and have an amazing life of your own.

Gid shares an amazing story and  you can feel the excitement of his journey and this helps you recognize the possibilities everyone has. You don’t have to be rich to have an amazing Act Two.

Starting something new, not knowing where it is going, can be a little scary.  That’s part of the excitement. But your journey may take you further than you even thought possible.  It did for Gid.

Gid said once determined to start his Act Two, the roller coaster of events fell into place, seemingly guided by his muse. Trust in what you are doing and by all means have a good time. This may be the time of your  life!

If you are open to starting your own Act Two, I would recommend Gid Pool’s book “Act Two & Beyond“. 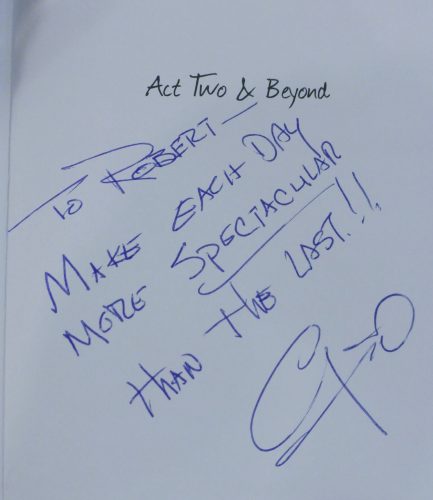