We are going to a lot more parties since moving to a Del Webb Community.

For instance, this week we went over to the neighbors house for a dinner party which included 4 couples. We arrived at 5:30pm and enjoyed cocktail hour, appetizers, and a great Italian dinner over conversation with our neighbors and friends.

Today we are going to Scott’s Downtown Gainesville for a birthday party for Pete, who is turning 80. The restaurant is closed to the public today so we will have the place to ourselves.

Two days from now it’s New Years Eve and we are going to two parties. A group on our street has been going out to a special New Years party dinner for several years and this year they invited us to go. We will be at the restaurant at 7pm for a special dinner of several courses plus your beverage of choice.

Next we are planning on making it back to our beautiful clubhouse for the traditional New Years Party in the Grand Ballroom to dance with music by a live band. After midnight we will drive the one mile back home on safe community roads.

Contrast that to before we moved to our lovely community. We usally stayed home on New Years because ee don’t drink hardly at all and it’s not safe of the roads. But you don’t have to be a heavy drinker to have a good time. Socially we like to bond with our neighbors and we never run out of things to talk about. Plus different people will be at each of these parties this week, so you get to socialize a lot.

These parties don’t drain you like the ones you went to when you were young and drank too much. These parties give you a good feeling and are fun!

Socializing is another advantage of living in an 55 and Over Active Adult Community with people you like and call your friends.

People like to socialize and there are even health benefits of doing so, especially as you age.

Isolation is a big problem with many seniors, mostly because they don’t have a way to meet new friends or stay in contact with old friends. Plus it can be difficult traveling to meet someone, say for lunch. People don’t become less social because they age, it’s just they lose the opportunities to do so.

All that changes with Active Adult Community living. At least the opportunity is there at your door step, if you want to be more socially active.

One of the concerns or questions that people think about when considering a move to a Active Adult Community is will I fit it? Will I be accepted? Will I make friends?

Once person says I am not religious and not too political, so will I fit in with the people at a 55+ community who are generally conservative?

Others wonder about the age differences between themselves and the others in a particular community and would that be a problem?

Others may be coming from a completely different region of the county and wonder if regional differences may keep them from fitting it.

Still some others may have an unrealistic view of life in a 55+ community and think that only old sedate people on walkers who just live out their life in a quite setting live there. These people think they are not ready for this yet and don’t want to be viewed as old.

Wow, that is a lot of concerns to address in one post, but having lived in a Del Community for one year now, here is my take.

In general, just about everyone living in our community seems to be very interesting, engaging and active. Having different backgrounds and experiences makes this a much more interesting place to live than your run of the mill suburban subdivision. People just want to have fun and there is an understanding that we are all in this together.  Just about everybody wants to make new friends and get along.

People want to get along and there is no where that is more likely to happen, than right here in an Active Adult Community.

Let me take the age concern first. In our community, there is a wide range of ages, all the way from 55 to 95. That’s 40 years. I think we have friends from every one of those decades.

There’s going to be people your own age. But here is the thing: it doesn’t make any difference. People are people and you will learn not to prejudge someone just because they are older (or younger) than you. Some of the most interesting people I have met are in their 80s. Even on the bocce and pickleball courts, several competitors in their 80’s can beat me at my baby age of 68 🙂 (I learned that lesson at the Senior Games too!).

As far as religion and politics, most of the time that is not discussed. In the present election season, just like in society at large, there is more voicing of opinions, but I don’t think you can escape that until after the elections. There are both Democratic and Republican clubs.

I have heard that us older people can be very opinionated, by this time in life, we know what we believe. I think most people just want to have fun and not be hassled. There is always one or two people you will run into that are to be avoided, but that is the exception.

There is going to be differences of opinions. Just let it go. It’s just their truth, not yours. No harm is being done to you and hopefully by this time in life, you don’t have to convert everyone over to your way of thinking.

Tip: If differences in opinion are an insult to you, please stay off Facebook, where people post things they never (thankfully) say in public.

Some of the people who moved from other regions seem to enjoying living here the most. They love to explore surrounding towns and attend local events. It’s like they are on vacation all the time, as everything is new to them.

They don’t see the whole purpose is to stay younger by being active, socializing, making new friends, having fun things to do.

The bottom line is that you won’t have any trouble fitting it. This is not high school. There are close to 100 clubs plus many more events for socialization if you want. People are probably going to be more interesting and diverse while being more friendly than where you moved from. 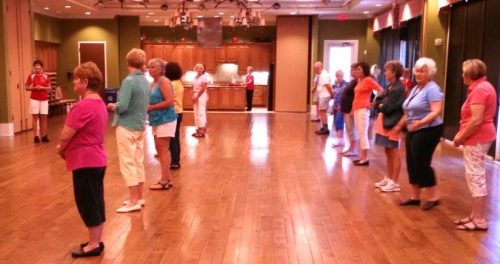 Another thing is that people are past the stage of trying to impress you with how much money they have or the size of their house or their personal belongings. Unless they mention it, you have no idea what they did for a living. If you live here, it matters not if it’s in a Villa or the largest home with basement. That is kind of freeing all in itself.